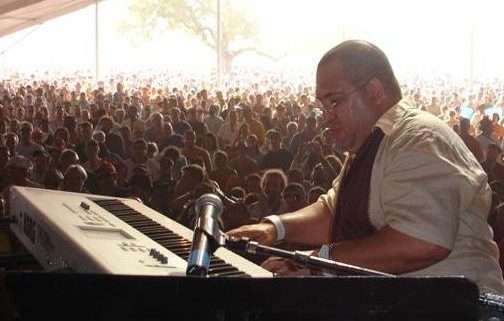 If you can imagine what kind of dedication it takes for a 12-year-old to develop the musical talent required to perform Rachmaninoff’s Piano Concerto No. 2 with the Havana Symphony Orchestra, you can only guess what sort of skill that kid possesses several decades later after devoting every day in the meantime to his keyboard.

Nachito Herrera’s resume reads like a list of headlines. He’s won a Grammy, an American Heritage Award, an Immigrants of Distinction Award and has even been nominated for an Emmy. He’s directed, conducted and performed in numerous high-caliber symphonies and orchestras all over the globe, composed scores and tunes for Hollywood films and led a variety of his own bands, composing and performing everything from classical to Afro-Cuban jazz.

His first memory of the piano was his father – also a professional pianist – practicing with his big band in the family’s garage in Cuba. He began playing at the age of 4. By age 7, his classical piano career was already in motion.

“I remember when I started playing simple notes. My dad was teaching me. Then I went to the classical musical school in Cuba. It takes about 16 years to get your PHD and I did it all the way through. Then I took an extra five years to get my PHD as an orchestra conductor. Right when I was a teenager I started to also be interested in other styles like jazz and Cuban music,” Herrera says.

It’s his passion for these three types of music – Cuban, classical and jazz, arguably the most difficult genres to master – that motivates the musician to spend the majority of his time on the piano. Even if he’s not performing or rehearsing, he practices eight to nine hours a day.

“I decided to keep myself playing all kinds of music. That’s something that is a blessing when you have the possibility to do it. I’m showing that music isn’t just one, that you can go from classical to jazz to Cuban. People ask me, ‘do you consider yourself a jazz pianist or a classical pianist?’ I say, I’m just a musician. I want to keep doing that, if it can give me good health and [keep] my fingers in good shape. It’s something like you’re free, like you’re doing what you want. It is the kind of payment of the investment of many years to get into the type of shape where you are capable of all kinds of music.”

Herrera relocated to the United States many years ago and now calls Minnesota home. He has firmly established himself among the nation’s top jazz and Cuban pianists but also returned to his “classical training” 10 years ago when he performed with the National Symphony Orchestra of Cuba as soloist. Before last week’s phone interview with Vail Jazz, Herrera had just returned from Spain, where he served as guest soloist for the Valencia Jazz Festival and was honored to receive “multiple ovations.”

“Respecting each audience is the most important thing for me. I practice every day as [if it’s] my first time practicing as a student,” he says.

Herrera’s all-day practice sessions involve at least a couple of hours of finger-strengthening exercises as well as trying out improvisation scenarios with a variety of musicians. A large block of time is dedicated, of course, to technique training.

“Any instrument you want to learn – not just piano – you have to have something special in technique,” he says. “I always like to explore the different possibilities. If you’re playing a piano concerto, they say it’s always the same notes, but the soloist wants to put that little flavor and feeling of yourself. With improvisation, it’s 50-50, half different motives you can practice and another 50 percent improvising. You need different elements to put together. I like to put myself in different situations … hard situations. It’s a lot to work with, but it’s always based on respect for the audience. I don’t want them to get out and say, ‘Oh well. That was OK.’ I always want to do my best.”

Essentially, the Cuban’s aim, regardless of performing on a huge stage with 30 musicians or in an intimate club with his trio, is to enrapture.

“In those two or three hours of a performance, I want that they completely get rid of their problems and bad situations,” he says. “I want people to get out of my concert completely satisfied.”

Nachito Herrera and his trio make their Vail debut with a pair of intimate performances at The Sonnenalp’s Ludwig’s Terrace on Wednesday, July 11. Doors for the first seating open at 5 p.m. with performance beginning at 5:30. Doors for the second seating are at 7:30 p.m. with music starting at 8 p.m. Tickets at $40 or $136 for a subscription to four of the five Club Series performances through Aug. 8. Full dinner service is available, not included in ticket cost and a $30 per person food or beverage minimum applies.

Nachito Herrera ramps up to a septet for the big stage at the Jazz Tent at Vail Square in Lionshead at 6 p.m. on Thursday, July 12. Herrera says his intention in designing the Night in Havana performance was “to show to the audience the versatility of the music we have in our country. It’s making a musical tour around all different styles, Latin jazz, cha, cha cha and classical. From east to west, when you visit my country, it’s unbelievable how you can absorb the different styles of everything from food to music. They’re all about celebrating that we’re alive and we’re together.” Tickets are $25 for general admission, $40 for preferred seat and $50 for premium seat. Subscriptions are also available for multiple performances. Beer, wine and cocktails are available for purchase.