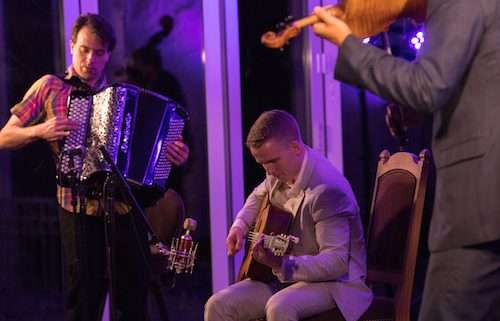 The every day experiences and encounters that might give the most thoughtful of people a few seconds of cerebral pause inspire Julien Labro to compose sophisticated melodies.

The French-born accordionist describes his song-writing inspiration as something that can happen “anywhere and everywhere.”

“For example, I came up with one song while I was on the subway in New York City. I saw a little boy of about 1 or 2 sitting in his stroller. He looked so comfortable and chill. He was probably one of the coolest kids I’d ever seen. At that moment a tune came to me almost like a soundtrack for him,” Labro says, adding that he whistled the tune into his phone in order to record it once he got home.

“Another time, I was waiting on a visa to go on tour in India. I was leaving the next day, but still hadn’t gotten my passport back from the embassy. I got a tracking number for UPS and when I looked it up, the status said, ‘out for delivery.’ Of course, this was the status for hours. Finally, I couldn’t take it anymore and wrote a tune about the experience.”

This number, “Out for Delivery,” does indeed convey the emotion of the situation, the instrumental tune moving from relaxing, liquid refrains to frantic sweeps of high-speed inflection during which Labro lurches forward and backward with the effort of furious button-pushing. The number then glides into a hypnotizing rhythm punctuated by quick drum rolls and sporadic accordion solos. One can almost hear Labro’s inner dialogue moving from calming reassurances such as, “the package will turn up any minute” to the demanding frenzy of “where is it?”

“It’s more about capturing a feeling or a moment. I’m never sure when or what will evoke a feeling or create a memory that I want to capture and share,” Labro says.

The French musician initially met fellow New York City transplant Olli Soikkeli during a concert organized by Frank Vignola during which the Finnish guitarist performed as a guest.

“I was impressed by how well he could play and by how deep his voice is. I mean, have you heard him speak? All joking aside, he is a very talented guitarist,” Labro says.

Both musicians began playing their instruments as young boys, both inspired by the music of Django Reinhardt and The Hot Club of France before branching off into a vast array of genres and touring Europe and then the world with a variety of jazz greats. To name just a few, both have shared the stage with Bucky Pizzarelli and Tommy Emmanuel. Soikkeli has toured with Paulus Schäfer and Cyrille Aimee and Labro has collaborated with Grammy winners Jason Vieaux and Fernando Otero.

After the pair once again crossed tracks a couple of years ago at The Crested Butte Music Festival, they agreed to join forces and have since toured throughout the United States and Finland as well as recording the album Rise & Grind, comprised mostly of Labro originals as well a rendition of Reinhardt’s “Belleville,” Edvard Grieg’s “Danse Norvegienne” and even a steppy and intricate interpretation of Willie Nelson’s “On The Road Again.”

“Even though we met through the gypsy jazz scene, our music has evolved outside of the Django Reinhardt tradition,” Labro says. “Olli and I both also bring our own unique and eclectic backgrounds to the music, which includes classical, jazz, blues, world music, and even metal. As a result, while you may still be able to catch aspects of gypsy jazz, the music is actually deeply rooted in jazz, which provides us with more freedom to improvise and create.”

Don’t miss Julien Labro and Olli Soikkeli Quartet (featuring bassist Eduardo Belo and drummer Nick Anderson) at the 2018 Vail Jazz Winter Series at Ludwig’s Terrace in The Sonnenalp on Feb. 21. The evening features two 75-minute performances. Doors open at 5:30 and the first performance launches at 6 p.m. The second seating takes place at 8:30 p.m. (doors at 8 p.m.) Tickets to each performance are $40. Seating is jazz club style around small tables. Dinner service featuring favorites from the Bully Ranch and a full bar will be available. For tickets or more information, call 970-479-6146.

Behind the outlaw blues