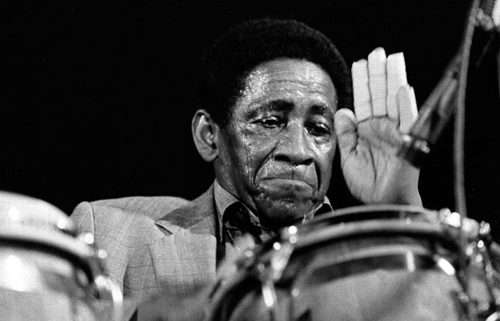 In 1917, Ramón Santamaría Rodriquez was born into poverty in a slum in Havana, Cuba. Nicknamed “Mongo” (a tribal chief in Senegal) by his father, he began to play the violin but switched to drums at an early age, settling on the conga drum as his primary instrument. As a teen, Mongo Santamaría (as he was known) dropped out of school hoping to become a professional musician and began a long journey that would take him from the slums of Havana to Mexico City and finally, in 1950, to New York City.
Fame, if it happens at all, doesn’t happen overnight. Mongo had to pay his dues.

During the 1950s, he played in the bands of Latin jazz luminaries Perez Prado, Tito Puente and Cal Tjader and in 1958 recorded his first album. The next year he wrote “Afro Blue,” a tune that eventually became a jazz standard.

As an aside, in the 1950s the audience for Latin (Afro-Cuban) jazz was relatively small in the U.S., with the early fans of the music being dancers who wanted to mambo (which has morphed into today’s salsa), a dance craze that swept the U.S. in the 1950s. For many of the dancers it was their first exposure to conga drums and it wasn’t long before conga dance lines were mandatory at weddings and Ricky Ricardo (Desi Arnaz) was on TV as the conga playing husband of Lucille Ball in “I Love Lucy.”

By late 1962, Mongo was 45 years old and was regularly fronting his own band. He had developed a unique sound and phrasing on the congas, but Mongo was still a relatively unknown conguero (conga player). But on a fateful night, his regular piano player couldn’t make a gig in the Bronx and instead a young substitute, Herbie Hancock, sat-in and the band played his new composition, “Watermelon Man.” The small audience went ballistic and Mongo sensed he had a potential hit on his hands, which he quickly recorded and the tune became a top 10 pop hit. The success of “Watermelon Man” placed Mongo in the spotlight for the first time, a position he would occupy for the next 30 years. During that period he recorded seven Grammy® nominated albums, won one, traveled the international jazz festival circuit and became an internationally famous conguero.

One of the distinguishing components of Afro-Cuban jazz, when compared to its American cousin, is best illustrated by comparing the instruments regularly employed by the percussionists in each genre. In the U.S. there is usually one drummer with a drum kit (drums, cymbals and maybe a wood block, cow bell and tambourine). In Cuban jazz there are multiple percussionists, playing not only a drum kit, but also congas, bongos, timbales, clave, guiro, maracas, shekere and many more. Since rhythm is one of the essential ingredients of jazz, whether American or Afro-Cuban, the difference in instrumentation is significant and can be explained by the fact that the slaves in Cuba were allowed to play their tribal instruments, while slaves in the South were generally denied the right to play drums and the American jazz tradition evolved with less emphasis on percussive elements.

So what is a conga drum? Known in Cuba as the tumbadora, it is a tall, narrow, conical barrel shaped drum with an open bottom and a drum head on top. The drum can be traced back to Africa where it was played in religious ceremonies by the ancestors of Cuban slaves. The drum made its way to the U.S. in the 1930s when Cuban dance music first began to be performed in NYC. In fact, the tumbadora is not just one drum, but like so many musical instruments, it comes in many different sizes and therefore different pitches. In the U.S., all of the drums are generically known as “congas,” but among the cognoscenti, each drum has a name. The five most popular sizes (from small to large and therefore higher pitch to lower pitch) are: requinto, quinto, conga, tumba and supertumba. Initially congas were played individually, but today congueros play two or more at the same time, using their fingers and palms (and sometimes their elbows) to create the polyrhythms that are fundamental to Afro-Cuban jazz.

Many jazz greats have gained fame by interpreting the music that came before them in a new and unique way, moving the music in a specific direction. Charlie Parker and Thelonious Monk come to mind. And then there are innovators who fuse distinctively different styles of music into something entirely new. Mongo had one foot firmly placed in the musical soil of Cuba (and therefore the music traditions of West Africa) and the other foot was planted in the music of his adopted home, the U.S. Over the last three decades of his life he fused Afro-Cuban music with American jazz, R&B, rock and soul, creating a “Latin groove” that was the beginning of the “boogaloo” era. Always flavored with the sound of his congas playing Afro-Cuban rhythms, his music was something entirely new , a “Latin-soul” sound that has endured ever since. In the process, Mongo popularized the conga drum to the point where it is now played in many different musical genres throughout the world. He truly was Chief of the Congueros.