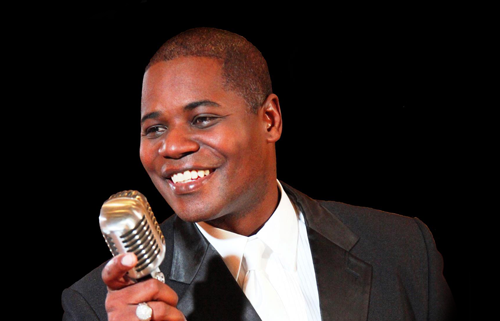 Growing up on the south side of Chicago, Cesar thought playing the guitar was his life’s calling. His family traveled to Indianapolis twice a year for a big family cookout, and he’d watch his cousin, Odell Rhodes, jam in the living room with Wes Montgomery, who, unbeknownst to 8-year-old Cesar, would come to be regarded as one of America’s most seminal jazz guitarists.

“I would stand there mesmerized,” Cesar said. “When we returned home, I begged my father to buy me a guitar for my birthday.”

By the time he was a freshman in high school, Cesar played in the jazz band and, after numerous early-morning hours delivering newspapers, saved up enough money to buy himself a Gibson Les Paul Red Sunburst. The young musician, who was also captain of his football team, as well as a baseball and basketball player, eagerly awaited his first performance in front of his peers in the school talent show. But while at football practice one day, his guitar was stolen out of the band vault.

“I ended up singing in the talent show,” Cesar said. “I won. The rest is history in the making.”

Jazz music was a mainstay in Cesar’s house. Every weekend, he and his father would sit in the basement for hours listening to Ella Fitzgerald, Stan Getz, Billy Eckstine, Brook Benton, Joe Williams, Arthur Prysock and their favorite, Nat King Cole. As he performed more and more frequently, Caesar’s voice and vocal style was likened to Cole’s, a fellow baritone and Chicago native.

“It is an honor and humbling to be compared to one of the greatest singers of all time,” Cesar said. “He was the first African American to host a radio and television show and one of the highest-paid artists in the music industry long before the Civil Rights movement. The one thing that we can all agree on is that his voice and timeless lyrics brought people together.”

Like Cole, Caesar moved to Los Angeles to pursue his vocal career. He was performing at a club in Encino, California, covering one of Cole’s most memorable recordings, “Route 66,” which had taken on special firsthand meaning to the recently relocated singer, when who should walk in but the King’s famed daughter, the late, great Natalie Cole.

“Natalie Cole walks in with Star Jones and sits in the second row,” Cesar said. “I start singing ‘Route 66,’ and something came over me. It was probably the best performance of my life. After the show, we hung out and talked and laughed. I told her about my Nat King Cole project. She said, ‘Cesar, you’ve got it.’ I will always cherish that moment.”

Cesar and Natalie kept in touch for years, and she attended several of his performances before her passing last December. He regards her “you got it” comment as the most memorable piece of feedback he’s ever received.

As far as other career highlights to date, Cesar names being chosen by Julio Iglesias as a background vocalist on his Tango World Tour. He was the first baritone vocalist to tour with Iglesias, one of the best-selling artists of all time. Another big notch on his wall was touring and recording with Peter White and recording his album “Jazz Standards for Today’s Audience” at Capitol Studios in Hollywood using the original microphone and Steinway piano Cole used in the 1950s.

“The record was engineered by Al Schmitt, winner of 23 Grammy Awards. Al worked with me right after working with Paul McCartney and Diana Krall in the same studio,” Caesar said. “The Capitol Records building is called ‘the house that Cole built’ because Nat’s record sales built that building.”

The night before Cesar’s monumental day of recording, he came down with a severe case of laryngitis.

“I had dreamed of playing in that studio,” he said. “You’ve got Frank Sinatra, Ella Fitzgerald, Sammy Davis … everyone has played in that room. The day of the session, I couldn’t talk. My throat was so sore. Al looked at me and said, ‘We’ll get you some tea.’

“I walked through the hallway and took the time to look at the photos on the wall of all the people who had played there. All of a sudden, the adrenaline kicked in. I used Nat’s microphone and sang ‘I Wish You Love.’ Something crazy happened, and it sounded amazing. Al said, ‘You’re channeling Nat.’”