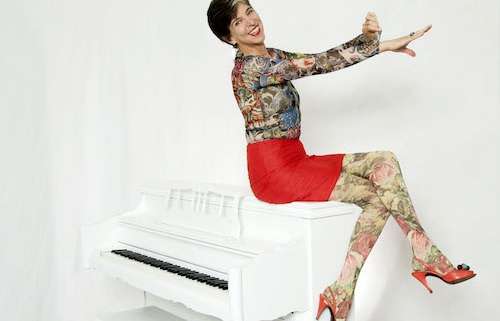 The charismatic storyteller rolls into town to open summer series

Last year Americana songstress/pianist Marcia Ball joined the ranks of Willie Nelson, Lyle Lovett and George Strait as an official Texas State Musician. The honor is bestowed each year upon a solitary artist selected by the Texas State Legislature, a team of local politicians and committee members. Ball is only the third female musician to receive the status (after Shelley King in 2008 and Sara Hickman in 2010).

Although she is most often categorized as a blues artist, Marcia Ball fits under many musical umbrellas. It’s true that the Austin Music Hall of Famer has earned Grammy nominations and countless blues awards throughout her storied professional career, dating back to her first record in 1972. But the Texas native also knocks out her fair share of New Orleans-inspired jazz rife with lively, steppy piano. Above all, Ball considers herself a storyteller.

“That’s one of the most striking aspects of my music. There are stories behind the songs, stories in the songs. I like to tell stories,” she says. “I like to balance what we record so there’s some up-tempo and fun songs and also some serious things to think about.”

In her most recent release, 2018 Shine Bright, the 12th studio album to her name, Ball set out to celebrate positivity and U.S. movers and shakers – both current and past – whom she admires, calling out individuals such as Martin Luther King, Rosa Parks, Ann Richards, Jackie Robinson, Stephen Hawking and Ruth Bader Ginsburg.

“I don’t write from an angst-filled standpoint,” Ball has always said, although her song-writing repertoire has been known to include emotional power ballads and touch on topics such as economic disparity, unfair imprisonment and oppressive politics. Some songs address global topics such as environmental devastation and hunger, while others speak of her own personal experiences and as-told-to unique sagas of people she meets. With the help of quick, upbeat instrumentation, all tunes manage take on an uplifting, feel-good quality.

“I write a lot when I’m happy and less when I’m not,” she says. “I write things down constantly. I’m a terrible eavesdropper. I’ll write down a snippet here, a snippet there, sometimes on paper scraps. When it gets down to the real point of putting a record together, I go back into my stack of notebooks and legal pads.”

The pianist’s stories have provided release and drawn deep connections with fans, too. Given that her subject matter sparks an emotional gamut, Ball’s fans have told her that the songs have not only stayed with them, but buoyed them through rough times.

“The energy we expend is given back to us multifold,” Ball says. “Somebody will come up after a show and say, ‘that made me so happy. It helped me so much.’ One woman wrote recently, ‘I work with you all the time.’ I am keeping her company – my music is keeping her company – as she works.”

Although she has been producing and performing music for nearly 50 years, not a day has ever passed in which the 70-year-old musician could see herself doing anything else.

“I never take for granted the fact that I’m getting to do what I love to do, what people dream about doing –traveling around and playing music. If you can’t have fun doing this, you need to re-examine your priorities,” she says.