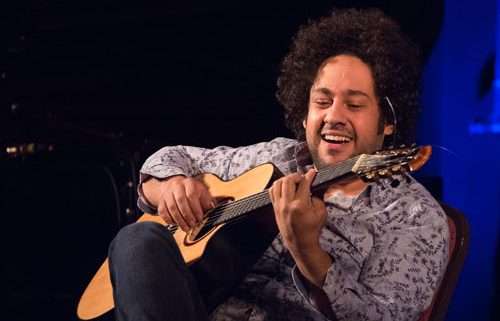 Even before he starts strumming the guitar, a warm and inviting vibe emanates from Diego Figueiredo. Maybe it’s his large, disheveled hairdo of tight curls or his genuine and nearly constant ear-to-ear smile. Maybe it’s the prominent fingernails on his right hand that serve as natural guitar picks and immediately identify him as someone who not only plays music, but embodies it.

Once the Brazilian strikes his first note – slowly and thoughtfully passing each finger over its targeted string – his allure takes on a level of near-hypnosis.

Add the enchanting voice of Italian singer Chiara Izzi to the mix and the swoon is complete.

Introduced to the guitar and to Brazilian samba music at a very young age, Figueiredo has fused the traditional sounds of his mother country with his own infectious style. He has produced 23 albums and performed on major stages throughout the world, including the Montreux Jazz Festival, the Hong Kong Jazz Festival, the Copenhagen Jazz Festival, and of course, the Vail Jazz Festival.

Although he’s on the road most of the year, back home in Brazil, where he’s considered one of the greatest guitarists ever born, Figueiredo is always freshly inspired for new arrangements.

“I feel when I’m at home, I’m completely relaxed. I get the old vinyls that my father gave me when I was nine or 10 years old and listen to the traditional Brazilian samba. It is the base of my heart and my style. I can get more ideas for this and when I’m traveling, I discover things that I add to it,” he says.

Of his many performances in Vail over the years, the 36-year-old once performed with award-winning French vocalist Cyrille Aimée, to whom he likens Izzi’s tone and style. A Montreux Jazz Festival Vocalist winner (2011), Izzi’s vocal approach blends jazz, pop and world music.

“Two years ago I met her in New York,” Figueiredo says of Izzi. “She has a very nice accent in jazz for Latin music and can sing in English, Italian, Spanish and Portuguese. I love when she sings in Spanish, because she has the balera, the strong Latin accent. I grew up with my mom and grandmother who loved the balera and I have a lot of reference to this style. She sings hundreds of traditional Brazilian songs, the old ones. She can sing anything. We have played many concerts together and are preparing a special repertoire for Vail.”

In addition to their very unique take on jazz standards, Figueiredo and Izzi will perform some original Brazilian Samba tunes as well as Bossa nova and a few other rare treats at their Feb. 2 performance in Vail.

Although Figueiredo has performed and recorded with musical icons throughout the world – including Al Di Meola, John Scofield , Yellowjackets, Hermeto Paschoal and Geraldo Azevedo to name a few – and played for massive audiences, it’s the intimate shows that he appreciates the most.

“I am more comfortable in small venues,” he says. “Sometimes I play New York for people who really know and really understand jazz, sometimes in places [where] there are all kinds of people – people with families and dogs, people who like country and rock and come for fun, not for the music. But everywhere, when people stop to listen, their reaction is the same.”

Among the most memorable reactions Figueiredo has elicited from a crowd was at a performance in the small town of Rexburg, Idaho a few years back.

“I played for 800 people in a nice theater and after there was a standing ovation for 10 minutes,” he recalls. “Signing the CDs, there was a huge line of 200 people. Moments like that make me more strong. Even at small concerts for 50 people, the reaction is so nice and so close. I’m very happy when I can see how I put my music in their hearts.”

Brazilian guitarist Diego Figueiredo and Italian vocalist Chiara Izzi perform at the 2017 Vail Jazz Winter Series at Ludwig’s Terrace in The Sonnenalp on Feb. 2. The evening features two 60-minute performances, the first seating takes place at 6 p.m. (doors at 5:30 p.m.) and the second seating at 8:30 p.m. (doors at 8 p.m.) Tickets to each performance are $35 in advance. Seating is jazz club style around small tables. Dinner service and a full bar will be available.

For tickets or more information, click here or call 888-VAIL-JAM.

A cool combo of bass and vocals Scroll to top