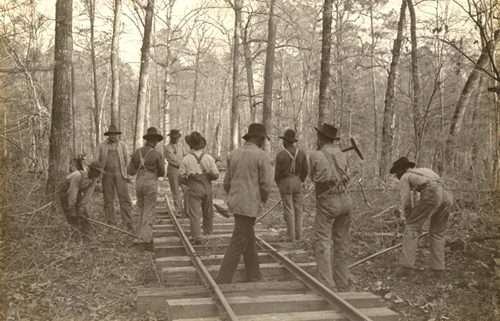 In East Texas before the Civil War, cotton was king and so was timber, as there were vast forests of longleaf pine trees covering eastern Texas. The lumber from the trees was an ideal building material and there was a great demand for it. So slaves were not only in bondage on cotton plantations but also in lumber camps in the backwoods of East Texas, with the greatest concentration in Harrison County, north-easterly Texas. When the Civil War ended, most of the freed slaves had little prospects for employment, so out of desperation they continued to work the cotton fields and lumber camps where they had previously toiled in involuntary servitude.

By the 1870s, railroads were established in and around Harrison County in order to efficiently bring the logs to market. For most of the loggers, this was the first time they had ever heard a steam locomotive with its accelerating “chug, chug” sound, which made its way into the music of Harrison County and beyond.

In many of the lumber camps and on the outskirts of towns where African Americans were living after being freed, “barrelhouses” began to be constructed as a place the former slaves could seek entertainment away from their white bosses. These sheds were stocked with barrels of whiskey and beer, a dance floor, and usually a tinny-sounding out-of-tune upright piano played by an itinerant piano player, so the patrons could dance. Gambling and fighting went with the territory, as well as a “back room” where “railroad ladies” earned their keep. Liquor was served directly from the barrels (hence, a barrelhouse) and a lot of partying went on. Beginning in the 1870s in the barrelhouses of Harrison County, a unique sound was heard emanating from these pianos, initially known as “Fast Western” and “Fast Texas” (probably derived from the local Texas Western Railroad). The music later became known as “Barrelhouse,” “Honky Tonk” and ultimately “Boogie Woogie” or the shorten version, “Boogie.” Over the next four decades as the music evolved, it was the trains that not only inspired the music, but also transported the itinerant piano players, first from lumber camp to lumber camp, and then to New Orleans, Chicago and beyond, thereby spreading the new music to a larger urban population of willing black dancers.

Boogie sprang from the blues and had all the elements of jazz – syncopation, improvisation and that “swinging feeling.” However, the blues were traditionally played in a slow tempo, while Boogie was a fast blues for dancing. The piano was played in a percussive manner, like a drum, beating out a rhythm (generally eight beats per bar played by the left hand, while the right hand played rhythmic variations of the bass line), so dancers could move aggressively with the music. Some say the pulsating and driving rhythm had sexual overtones and while the origin of the name is not clear, brothels were known as “boogie houses” and to “pitch a boogie” was to have a party or sex. Whatever your interpretation of the music and its name, to the churchgoing blacks it was clear that this was the music of the devil, even the name suggested an abomination.
Because initially both Boogie and Ragtime were played on a piano, exclusively, and evolved at roughly the same time, they are sometimes confused, but in fact are quite different. Both styles use the right hand to play syncopations, but the left hand in Ragtime plays a bass line that is a 2/4 “oompah” type rhythm, very much like a Sousa-style march. While the left hand in Boogie has a shuffling, walking and swinging quality that creates a tension and excitement, a sense of perpetual motion, with an explosive quality, that makes you want to dance. Ragtime, on the other hand, makes you want to tap your foot.
Alan Lomax, the famous ethnomusicologist, described the originals and sounds of Boogie as follows: “Anonymous black musicians, longing to grab a train and ride away from their troubles, incorporated the rhythms of the steam locomotive and the moan of their whistles into the new dance music they were playing in jukes and dance halls. Boogie Woogie forever changed piano players, as piano players transformed the instrument into a polyrhythmic railroad train.”
By the 1920s, Boogie was well established in urban centers with large African American populations, but few white Americans knew the music. That all changed on the evening of Dec. 23, 1938, when three African American Boogie masters, Meade “Lux” Lewis, Pete Johnson and Albert Ammons, performed at Carnegie Hall at the legendary “Spirituals to Swing” concert. Their performances set off a nationwide dance frenzy that continues to this day. How is that possible? Think back to the early music of Little Richard, Chuck Berry, Ray Charles and Jerry Lee Lewis, who famously said, “They called it blues. They called it Boogie Woogie. Then they changed the name of it to Rock and Roll.” So what started out in the barrelhouses of the backwoods of Texas as a fast blues, morphed into jazz and ultimately shaped the beat of rock and roll.

Vail Jazz is pleased to present Vail’s favorite “Boogie Queen,” Marcia Ball, in concert at 6 p.m. on July 6 in the Jazz Tent at Vail Square in Lionshead. Singing and playing barrelhouse piano and the blues, Marcia always leaves her audiences wanting more.

The life of a New Orleans Jazz Singer

Plan for more fireworks of the auditory variety when Marcia Ball returns to... Scroll to top