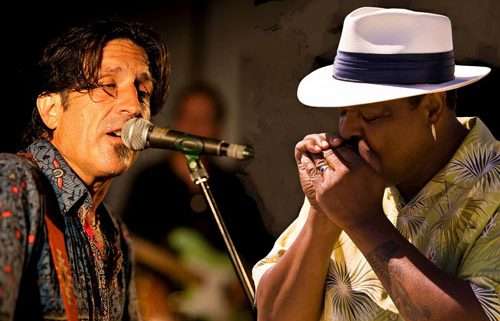 When Phil Wiggins and George Kilby Jr. first crossed paths, they did not initially strike up a kinship over music. They originally bonded over the post-apocalyptic novel “Riddley Walker.” After one of them tossed out an off-handed reference to the obscure piece of literature and the other recognized it, they realized they shared an uncanny connection. Later, when paired with their individual euphonious talents, the two quickly discovered that this particular connection would ignite a profound, contagious energy.

“Phil is a virtuoso instrumentalist and I am at best a damn good guitar player,” Kilby Jr. says. “His virtuoso playing is a very important factor to that thing we do. But I bring to the partnership a songwriting ability and a unique way of approaching acoustic blues.”

The “blues” moniker is usually one that both musicians often shy away from when describing their own music, though it is the umbrella under which their sound typically falls.

“That word – blues – is sometimes good and sometimes not so good,” Kilby Jr. says. “Sometimes people have preconceived notion of what that is. Our thing is about writing great music and performing it.”

A native of Washington D.C., Wiggins took up the harmonica as a young boy. By the time he was a teenager, his fiery playing capabilities had gained him such notoriety that he was sitting in with the likes of blues icons Johnny Shines, Sunnyland Slim, Sam Chatmon, Robert Belfour and Howard Armstrong. He also caught the attention and admiration of infamous guitarist John Cephas, who invited the harmonica prodigy to form a duo. Throughout the ensuing three decades, the two performed on every continent other than Antarctica and in historic venues such as The White House, New York’s Carnegie Hall, London’s Royal Prince Albert Hall and the Sydney Opera House. They recorded more than a dozen albums and gleaned numerous blues awards. Since Cephas’ death in 2009, Wiggins has shared the stage with a gamut of other famed musicians, from guitarist Rev. John Wilkins to vocalist Eleanor Ellis. He’s appeared in films and has imparted his skills to countless young harmonica players.

Also, just last year, Wiggins joined the ranks of Cephas, B.B. King, Pops Staples, Mavis Staples and John Lee Hooker in receiving the National Heritage Fellowship by the National Endowment of the Arts. Wiggins is only one of three harmonica players to earn this honor in the Fellowship’s 35-year appropriation. Pinetop Perkins is another standout recipient of the Fellowship and it was aside the famed pianist that Kilby Jr. shared the stage and collaborated on a number of recordings over the years.

Born in Alabama, Kilby Jr. was drawn to the guitar and to “rough-cut American roots music” at a young age. It has since been his aim to produce his own brand of it, all while turning colorful life chapters studying at Princeton University, busking in Paris and recording or performing with an impressive variety of big name artists, including The Beach Boys, Henry Butler and Railroad Earth.

After fusing their talents many times on stage over the last seven years, Kilby Jr. and Wiggins joined forces to create and produce their first full-length album, which is set to be released on March 15.

Kilby Jr. describes the recording as “not what most blues fans would come to expect” – a collection of songs that evoke deep emotions as well as an intense brand of social consciousness.

When asked to name a highlight so far of his partnership with Wiggins, Kilby Jr. recounts a recent performance for an auditorium of young students in Loveland, where the duo are slated to return for a festival honoring Martin Luther King Jr. before their Vail Jazz performance.

“We were doing a program on racism and the blues and were playing our song, “Black Man on the Corner.” It refers to Eric Garner, who was on the corner selling cigarettes when he was killed,” Kilby Jr. says. “We did the concert with the kids … I’m getting choked up thinking about it. We asked them to sing along. These kids were in 8th grade, probably most of them didn’t know who Eric was. Then we heard them. They were all singing. It was incredible. ”

Don’t miss Phil Wiggins + George Kilby Jr. at the 2018 Vail Jazz Winter Series at Ludwig’s Terrace in The Sonnenalp on Jan. 17. The evening features two 75-minute performances. The first seating takes place at 6 p.m. (doors at 5:30 p.m.) and the second seating at 8:30 p.m. (doors at 8 p.m.) Tickets to each performance are $40 in advance. Seating is jazz club style around small tables. Dinner service featuring favorites from the Bully Ranch and a full bar will be available.