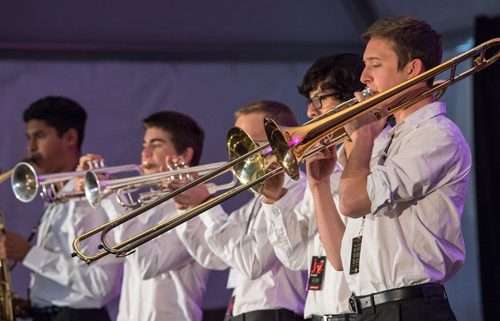 “It’s something you hear about a lot,” said Georgia-based pianist Clay Eshleman of the Vail Jazz Workshop, standing beside the white tent in Vail Square, where he and the other 11 Vail Jazz All-Stars had delivered a crisp performance to a cheering crowd. “It is so special to be here.”

Indeed. Eshleman joins the ranks of pianist Robert Glasper, saxophonist Grace Kelly and trumpeter Ambrose Akinmusire as an alumnus of a workshop festival that stands out for its superior musical quality, extraordinary level of intimacy—six instructors for 12 students (a pair of sextets)—and for the way students are generously integrated into performances. Student groups played almost every day this year and also sat in at nightly jams with the likes of guest artists Ken Peplowski and Dick Oatts on reeds and Butch Miles and Jeff Hamilton on drums.

The culmination of a weeklong workshop, the Vail Jazz Party runs over Labor Day Weekend (Aug. 31–Sept. 4). Inspired by Colorado’s intimate Gibson’s jazz gatherings of yore, where artists and audience would mix and mingle, the Jazz Party is part of the area’s summer-long Vail Jazz Festival, produced by founder Howard Stone, the recipient of this year’s DownBeat Jazz Education Achievement Award. Performances took place in the grand ballroom of the Vail Marriott and at the outdoor tent in Vail Square, in the area called Lionshead, surrounded by the gigantic, evergreen- and aspen-painted shoulders of the Rocky Mountains, where ski runs serve as a summer magnet for mountain bikers and hikers.

Francies (thunderous, fearless, outside-the-lines) and  Peplowski (artful, fleet and dulcet-toned) were often at the center of the party’s many musical highlights, which hewed to the mainstream.

On a Sunday session devoted to Latin and Brazilian rhythms, Peplowski and Australian reedist Adrian Cunningham gamboled through a dazzling clarinet-flute duo by Pixinguinha. It was also a pleasure to watch how Peplowski warmly welcomed young Denver-area reed player Chris Ferrari to one of the late-night jams.

Houston native Francies, a 2012 alum who recently signed with Blue Note, took the crowd’s breath away as his cascades of substitute chords and machine-gun runs illuminated Charles Mingus’ “Nostalgia In Times Square.”  Other delights included the outsized organ trio of the diminutive Akiko Tsuruga, powered by Hamilton, who, along with Miles, gave textbook demonstrations in big band drumming as they took turns anchoring Denver’s H2 Big Band in a tribute to Buddy Rich.

The Rich program was accompanied by vivid film excerpts of the drummer, including closeups of his incredible left hand, and concluded with a Q&A in which Hamilton talked about Rich’s extraordinary prowess. This was one of three audience-education programs—others focused on Cole Porter and Mongo Santamaria—that dovetailed nicely with the jazz party’s instructional mission.

It was a privilege to see that mission accomplished in real time. At a debriefing session one morning, Clayton delivered a stirring, no-nonsense sermon to his young charges about how to navigate the jazz life, after which Nash, during a rehearsal of a New Orleans-style medley arranged by Gordon, called out one of the drummers for not giving his all. You can bet that during the performance the next day, everyone on stage was “all in.”

As Clayton said, only semi-facetiously, on stage one afternoon, teachers spent the week putting their “foot on the necks” of the students. It was a grueling workout, and no one seemed to mind.

“Just to hang out all week with these masters gives you an amazing amount of energy,” said drummer Kofi Shepsu, of Richmond, Virginia.

Alexandria, Virginia, trumpeter Geoffrey Gallante, the most musically mature player, agreed that the collective wisdom of the instructors delivered a message of “humility.”

Make a note of those names. And put the 2018 Vail Jazz Party on your calendar. It’s going to be around a while. A record 3,500 seats were filled this year by the predominantly older crowd, which contributed $87,000 to the festival’s fundraising drive. And don’t be put off by the exclusive-sounding locale. Summer hotel rates are surprisingly low and reasonable restaurants can be found. As student Eshleman said, Vail is a very special occasion. DB