If you have watched late night TV any point over the past two years chances are you’ve seen Jon Batiste and Stay Human, the house band for The Late Show with Stephen Colbert. The band has had several Vail Jazz Alumni sit in for shows over the course of its tenure including Grace Kelly (’08), Russell Hall (’10), and Patrick Bartley (’10). The most frequent Vail Jazz Alum seen in Ed Sullivan theater was Eddie Barbash (’05), one of the founding members of Stay Human. 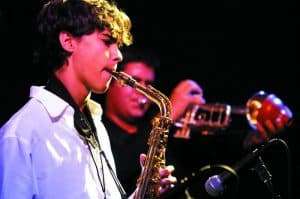 Barbash looks back on the Workshop with fond memories. “I remember being encouraged to tear up our real books. I think it was me and maybe one other kid that actually had brought real books to the workshop but I hadn’t brought mine in to the classes. After the talk about tearing up our real books though, I brought mine in and we all ripped it to shreds together. I don’t think the teachers were there at the time but me and the rest of the students just destroyed my real book. I haven’t really learned any tune off of sheet music since then. I learn it all by ear. And I hadn’t been doing that until I went to Vail.”

He continued to say how he developed this skill since his move to New York City to attend Juilliard. “Most of the bands that I’ve played in since living in New York have not had written music; everything has to be learned by ear. Jon (Batiste) never wrote out music so that was a lot of learning, sometimes really complex stuff, by ear. And we had to do it really fast, especially when we were on the Late Show. We would have to learn a song for a walk on and we would only have a few minutes to do it. If a guest would mention a song or something that related to a song that we could play, someone would pull the song up and play it in our in-ear monitors and we would learn it during the interview. So my experience at Vail was really important because it turned me on to learning things by ear.”

At the end of 2016, Barbash left Stay Human and the Late Show to focus more on his own music. While the saxophone is traditionally associated with jazz, Eddie uses his to play a combination of bluegrass and fiddle music. “I had a couple of friends that were into that music, blue grass and such, and we would play along with recordings and I really enjoyed it. I started getting serious about it when Jeff Picker, who was a great jazz bass player and friend, learned how to flatpick bluegrass guitar. We were hanging out and he showed me a fiddle tune to play. It was the first fiddle tune I learned. It was such a different style of music; it was fun to play, it was such a different concept of improvising, I really liked. It just sent me down that road of learning more and more fiddle tunes, about that whole world of music.”

“I always thought it was kind of funny that I ended up on the Late Show because I’d been doing the fiddle music for the last three years or so and besides that I was only really playing older jazz stuff, pre-bebop stuff. The whole band was a bit like that: not playing popular music. We always thought it was funny that we landed this gig on mainstream television because what we were into was so not mainstream and we were on TV still doing our own thing.”

“The thing about playing music is there really is no correct path, in fact there’s really no right or wrong in it at all. When it comes to teachers, especially, people try to tell you ‘this is what you need to know’. It’s important to listen to anyone that’s intelligent and successful but definitely view their advice through your own lens. Because at the end of the day there are no rules and there’s no right or wrong when it comes to what music should sound like or how it should be made.”