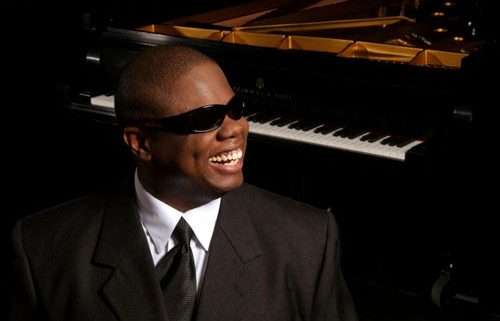 Joe McBride does not readily liken himself to Ray Charles. But the two vocalists/pianists do share a few similar qualities, not all of which are completely obvious. Charles, whose nicknames included “The Genius” and “the Father of Soul,” passed away in 2004 at the age of 74, leaving behind a legacy as one of the greatest musicians in history and a catalogue of hits spanning six decades, including “Hit the Road Jack,” “Georgia on My Mind” and “Unchain my Heart.”

While Charles grew up in Florida in the 1930s and McBride was born in 1963 and spent his childhood in Missouri, both artists took an early interest in music and both embraced numerous genres. 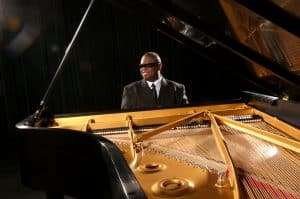 “My first experience with a musical instrument was when I was 4 years old,” McBride says. “I had gone to a Christmas party at my cousin’s house. I found my cousin’s keyboard and started playing it. I didn’t want to leave. I cried for three, four days when we left. My parents broke down and bought me a keyboard.”

By the time he was 8, McBride’s church bought him his first piano and his love for music of all varieties continued to grow. As a teenager, McBride contracted a degenerative eye disease that would eventually take his eyesight. But that did not slow the pursuit of his musical dreams.

“There are always greater or lesser abilities. I don’t think because I was blind I concentrated more on music. It’s because I love it,” McBride says. “The skill has to do with who you are as a person. There are a lot of adversities that a lot of people have. It doesn’t have to be physical. It could be someone that grew up in hardship.”

Ray Charles, who, as a child watched his younger brother drown in a laundry tub and then lost his mother as a teenager, certainly faced his share of hardship. Charles took on an interest in the piano around the age of 4, but began losing his eyesight (most people believe from glaucoma) at about that age and was completely blind by the time he was 7. Shortly thereafter, Charles’ mother managed to enroll him into St. Augustine’s School for the Deaf and Blind and his piano skills flourished. He learned how to read and play braille music, performing classical compositions by Bach, Beethoven and Mozart. However, he was more interested in the songs he heard on the radio – jazz, blues and country.

Charles moved to Seattle at the age of 18 and formed his own band. A year later, he notched his first national hit, “Confession Blues” and began arranging tunes for the likes of Dizzy Gillespie and Cole Porter. He moved to Los Angeles and continued making hits and crossover success in numerous genres – gospel, jazz, soul, Latin, blues, country and western.

“Ray was probably the first crossover team,” McBride says. “He came on the scene back in the early 50s, when he pretty much just kept to gospel. He kept the style but changed the message. Then came the R & B and the big band stuff with Count Basie. He even did country with Willie Nelson and Merle Haggard. He did R & B, soul, rock … He influenced a lot of styles.”

Charles, was of course, a major inspiration for McBride as he pursued his own career as a young musician, realizing, like Charles, that he embraced and was influenced by a vast selection of styles.

“Ray was one of many inspirations,” McBride says. “As a kid, I was exposed mostly to rock n’ roll. At my grandmother’s, she’d always have Ray Charles in the background. In college, it would be part of my assignment to learn about different artists. I have so many different influences – from Ray Charles to Beethoven, Jimi Hendrix, Ella Fitzgerald, Green day, Elvis Costello … I just love music. I listen to something different every day. But if I were to call something my home, it’d be somewhere in the middle of jazz and soul.”

After studying at Webster University in St. Louis and then North Texas, McBride spent the next three decades creating and recording music and touring the world as a bandleader. He’s opened for the likes of Whitney Houston, The Yellowjackets and Larry Carlton. He’s recorded nine full-length albums featuring guest musicians such as Carlton, Grover Washington Jr., Dave Koz and Peter White, to name just a few. Like Charles, McBride has learned something from and his sound been shaped by every individual with whom he’s worked. Whether infusing a contemporary pop tune with his own jazz stylings or performing a Ray Charles classic with a smooth and distinctive flare that’s all his, McBride embraces every opportunity to grow.

“I’m more influenced by Ray as a style, the geniosity of being able to cross over and play with so many kinds of musicians,” McBride says. “For me, it’s more about the music … how he influenced everyone else.”

Joe Mcbride Trio – vocalist and pianist Joe McBride, drummer Jamil Byrom and bassist Jonathan Fisher – is joined by special guest Bob Rebholz on saxophone to pay tribute to Ray Charles in the grand finale of the 2018 Vail Jazz Winter Series. The tribute takes place at Ludwig’s Terrace in The Sonnenalp Vail on April 11 with an evening of classics crossing the lines of jazz, funk, R&B and soul. Doors open at 5:30. The first performance begins at 6 p.m. The second seating takes place at 8:30 p.m. (doors at 8 p.m.) Tickets to each performance are $40. Seating is jazz club style around small tables. Dinner service featuring favorites from the Bully Ranch and a full bar will be available at both seatings. 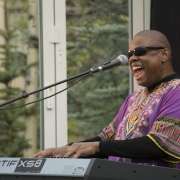