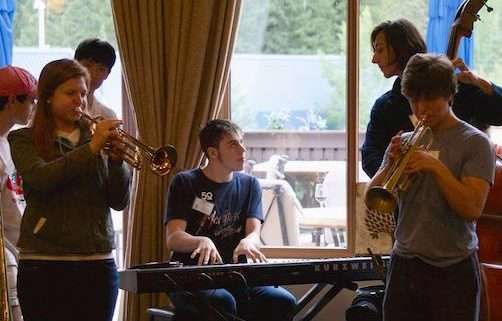 Esteban Castro was running to escape the rain before the biggest experience of his young life, performing in the prestigious Montreux Jazz Piano Competition in Switzerland. Only 13, he was the youngest pianist in the history of the contest and was up against extraordinarily talented adults from all over the world. He’d been practicing a steady 13 hours a day back home in New Jersey leading up to the competition. It was two days before his performance and he was outside enjoying the stunning Swiss landscapes when it started pouring. He ran toward cover, slipped, fell and landed on his right hand.

“It was swollen; looked and felt terrible. I think it may have been broken. It hurt more than I put on. I didn’t say how much it hurt because I still wanted to participate,” recalls Castro.

In a cinematic feat of overcoming adversity, Castro entered the contest and powered through the pain. Uninhibited, his hands fluttered up and down the keys.

“It was one probably the most rewarding experience I’d ever had,” he says. “I was completely shocked when I won.”

This tenacity – not to mention modesty – is characteristic of the teenage musical prodigies that participate in the Vail Jazz Workshop, the 2018 edition of which is underway this week, featuring 12 carefully selected young musicians from across the country.

The group was vetted from more than 150 highly qualified applicants for the 23rd edition of the workshop. Led since its inception by iconic jazz bassist John Clayton, the Vail Jazz Workshop has cultivated some of the nation’s top professional jazz musicians and features fellow Vail Jazz Party House Band members and mentors Jeff Clayton, Bill Cunliffe, Wycliffe Gordon, Terell Stafford and Lewis Nash. The week-long workshop is comprised of intimate and intensive training – two students to one mentor – focusing on the art of improvisation and playing by ear. Upon “graduation,” the group of students becomes the Vail Jazz All-Stars, performing on the same stage as their mentors in the 24th Annual Vail Jazz Party over Labor Day weekend.

“We look at each other and say, ‘Wow. Not only are they doing stuff we could never do at their age, but they’re doing stuff we can’t even do now’” John Clayton says of the students.

Turning 16 during his time in Vail, Castro is very much looking forward to the workshop with his musical heroes. In addition to the Montreux Jazz victory, he’s won numerous other major awards in his young career, recorded three albums and has been performing around New York City for the last several years – making his Blue Note debut at age 10. He wrote his first composition at age 6 and began tinkering on a toy piano as an infant, his parents renting him his first real piano at age 4. When asked how much of his free time he spends at the piano these days, Castro is momentarily confused by the question.

“It’s pretty much all of my free time,” he says.

“I find that my best stuff comes out in a natural way,” he says. “It’s less of a meticulous process and more of a creative process. The stuff I’ve written I’m most proud of, I’ve written in a short amount of time, maybe 30 minutes. I love the feeling of connecting with an audience. I want to play all over the world and make people happy with my music. That’s what it’s all about.”

In addition to Castro, the 2018 Vail Jazz Workshop includes fellow pianist Eugene Kim. The 17-year-old South Korean was invited to play at the Newport Jazz Festival and has attended the New England Conservatory’s preparatory school and Jazz Lab, winning numerous awards including the Massachusetts Association for Jazz Education’s gold medal, first place at the UNH Clark Terry Jazz Festival, first place at the Berklee High School Jazz Festival and Downbeat Magazine’s Student Music Award for Outstanding High School Jazz Soloist Performance. Bassists include Rhode Island native and Grammy Band finalist Ian Banno, 17, who was selected for the Berklee Global Jazz Institute Workshop at the Newport Jazz Festival. Also, Los Angeles native and bassist Dario Bizio, 16, has played in a variety of school-based bands, orchestras, combos and ensembles. Trumpet players include 17-year-old Florida native Summer Camargo, who has been principal trumpet and section leader for the Dillard Center for the Arts Jazz Band and Wind Orchestra, lead trumpet for the All Jazz Band of America, lead trumpet of the All-County Jazz Band and has played in Florida’s All-State Jazz Band. California resident Joey Curreri, 18, won the National YoungArts competition and has been a member of several Grammy bands, played in the Monk Peer-to-Peer All-Star Sextet and received the Los Angeles Jazz Society’s Shelly Manne New Talent Award. From Massachusetts, trombonist Nate Jones, 16, believes in bringing personality to his music and has won numerous awards from the Massachusetts Association for Jazz Education, five Stanford Jazz Awards including Outstanding Soloist and three Outstanding Musicianship Awards from the Clark Terry Jazz Festival. After his father introduced him to trombone as a small child, Arlington, VA’s Zach Niess, 18, has played with the Jazz at Lincoln Center Summer Jazz Academy Milt Hinton Big Band, the Grammy Band, a YoungArts combo, the Arlington Youth Symphony and will be attending the Frost School of Music at the University of Miami. Traveling from Olympia, Wash., saxophonist Willie Bays, 16, was accepted into the Next Generation Jazz Orchestra, has performed in Dizzy’s Club Coca-Cola in NYC, the Montreal Jazz Festival, Toronto Jazz Festival and the Rochester International Jazz Festival and has his own quartet. New York native and sax player Coby Petricone-Berg, 17, has played in numerous bands, including the Manhattan School of Music PreCollege Jazz and Berklee Global Jazz Institute at Newport Jazz Festival, was as a Grammy® Jazz Camp Finalist and a National YoungArts Merit Award winner. Also a Precollege Jazz Student at Manhattan School of Music, drummer Varun Das studies with greats Tony Moreno and Tommy Igoe, has played in the Grammy Jazz Band, the Manhattan School of Music Precollege Big Band, the Princeton Symphonic Brass Group and has toured Europe with the New Jersey Youth Symphony. Last but not least, 17-year-old drummer Michael Manasseh of Massachusetts incorporates a myriad of styles into his rhythms – rock, funk, Latin, Afro-Cuban, Indian and West African. He was a Grammy® Band Finalist and has won many awards, including Outstanding Soloist in the Charles Mingus High School Competition, the Massachusetts Association for Jazz Education Outstanding Musicianship Award (twice), and Berklee High School Jazz Festival Outstanding Musicianship Award.

See the 2018 Vail Jazz Workshop students in their newly found stardom. To kick off the 2018 Vail Jazz Party, it’s a triple bill at the all-weather Jazz Tent in Lionshead’s Vail Square beginning at 6 p.m. with the Vail Jazz All-Stars followed by the Vail Jazz Workshop Alumni Quintet at 7 p.m. and wrapping up with an 8 p.m. performance by the mentors themselves, the star-studded Vail Jazz Party House Band – John Clayton, Jeff Clayton, Terell Stafford, Bill Cunliffe, Wycliffe Gordon and Lewis Nash.

Inside the Vail Jazz Festival: Organ Donors Scroll to top