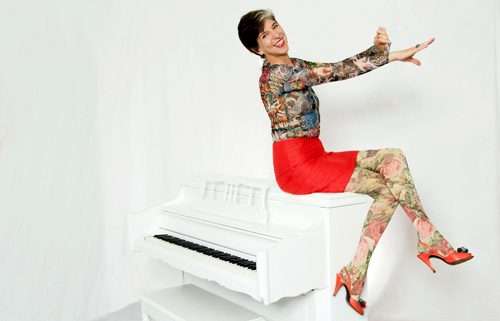 The ‘saucy’ southerner discusses ‘two-fisted’ piano, eavesdropping and being the ‘fun’ influence on her grandchildren

Besides playing some of the most romping, two-fisted piano around, Marcia Ball also puts on a poppin’ summer camp. She calls it “Camp Granny” and the lucky campers are her 9- and 4-year-old grandsons.

It’s a hot day at home in Austin, TX and Camp Granny is in session, as evidenced by the boisterous piano notes in the background during a phone interview with Ball.

“He likes to pick things up by ear,” explains the five-time Grammy nominee about 9-year-old grandson, Lincoln. “He takes piano lessons from a real teacher but I’m showing him the left hand.”

Chances are, the kids possess a solid genetic predisposition for piano prowess.

And, by the way, “two-fisted,” is a slight misnomer when it’s used to describe Ball’s style.

“That phrase was coined a while back in reference to Katie Webster, a great piano player from Lake Charles, Louisiana – 20 miles from where I’m from. She’s got an album called Two-Fisted Mama! It means playing the piano by banging on it. I’m always ready to rumble, but mostly I use my fingers,” Ball says.

The 68-year-old then pauses a minute to review some other terms that have frequently been used to describe the style and image she’s etched over her musical career that’s spanned nearly five decades. Another descriptor that’s come up continuously is “saucy.”

“Saucy to me implies ‘with attitude, a bit of an edge, a bit of sassiness. It’s someone with a sassy attitude,” she says. “…That’s fairly accurate.”

Ball’s sauciness has been embraced and heralded by every audience she’s encountered in her decorated career, over which she has recorded 17 albums, made feature performances in every massive jazz and blues festival countrywide (including Monterey Jazz Festival, Chicago Blues Festival, Austin City Limits and of course, many years at the New Orleans Jazz and Heritage Festivals), landed 10 Blues Music Awards, eight Living Blues Awards and inductions into both the Gulf Coast and Louisiana Music Hall of Fame. Just this spring she was deemed the 2018 Texas State Musician.

Ball is humble about her accomplishments, however. Getting back to Camp Granny, she takes zero credit for her grandchildren’s burgeoning musical abilities.

“It’s none of my doing, I assure you,” she says. “The older one is working on playing music right now and is autodidactic. He’s developed an interest in classical music and he’ll ask about a piece or hum me a piece and I’ll figure out what it is. I asked if he wanted to try piano lessons and he did.”
Ball, as it turns out, had no designs on being the kid’s teacher.

“Somebody else needs to teach your grandchildren things,” she insists. “I want to be the fun one, not the disciplinarian.”

It’s not easy to imagine Ball being anything but playful when it comes to the piano. Although she has written numerous moving ballads and love songs, most of her musical creations – both instrumentally and lyrically – are fueled with a distinct sense of adventure.

This is largely due to her wandering eye – or ear – for inspiration.

“I pick up a lot of my song ideas from eavesdropping,” she says. “That’s what happens. It happens in conversations with friends. You hear a word or phrase and write it down. I was with another musician the other day and we both overheard the same line in a conversation. It was a race to write it down.”

Ball is in the midst of a songwriting frenzy this summer, stringing together the follow up to her latest release, 2014’s The Tattooed Lady and The Alligator Man, the title track of which was inspired by the subjects themselves.

“They told me their story and I wrote it down. People like that story. I don’t have a reasonable explanation for what strikes me as good storytelling for each song. It’s just like it walked up to my porch and knocked on my door,” she says.

The most rewarding aspect of her musical career, says the Louisiana natve, is the way her stories resonate with audiences.

“I talk to people after the gigs almost every night and it’s a cool thing if a song has meant anything to them. I get to hear about who used ‘The Power of Love’ at weddings or ‘Human Kindness’ in presentations about ethics.”

When asked to speculate on what her songs or her presence – albeit not as a teacher – will mean to her piano-playing grandson, Ball finally acknowledges that there might be a place for her.

“I have thought about the fact that maybe they’ll ask him about his musical history one day and he’ll say, ‘my grandma played the piano.’ Yeah, thinking about that makes me feel pretty good.”

Marcia Ball @ Vail Square
Don’t miss Marcia Ball’s return to Vail at 6 p.m. July 6 in Lionshead for the 2017 opening performance of Vail Jazz @ Vail Square. General admission tickets are $25, $40 for preferred seats and $50 for premium seats. Preferred and Premium seat subscriptions are also available for multiple performances. Presented by The Jazz Cruise and Blue Note at Sea, Vail Jazz @ Vail Square takes place every Thursday evening through Aug. 24 in the all-weather Jazz Tent in The Arrabelle courtyard in Lionshead. Drinks are available for purchase. For tickets or more information click here or call 888-VAIL-JAM.

Boogie in the Barrelhouses of the Texas Backwoods