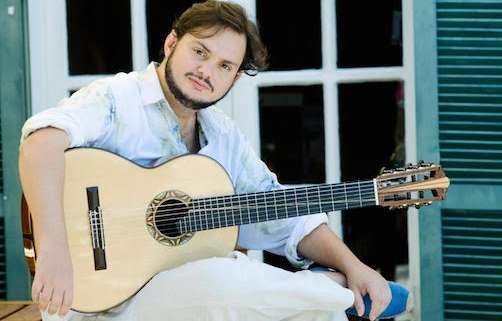 Yamandu Costa embraces the music of his entire continent

Growing up in a musical family in Brazil’s Rio Grande do Sul near the borders of Argentina and Uruguay, Yamandu Costa took up the guitar when he was only seven years old. By the time he was a teenager, he had developed a deep passion for numerous classical styles of Brazil – bossa nova, samba, choro, etc. – and also for the seven-string version of the instrument popular in his country. He was also influenced by the unique folk genres (ie: tangos, milonga, chacera) of bordering countries and began winning awards for his one-of-a-kind playing style, which is characterized by all 10 fingers moving at such a lightning fast pace that the resulting sound resembles that of 200 strings rather than seven.

To watch him play – his fluttering eyelids and head rolling along to each strain – is evidence enough that he lives to play, but here are a few other reasons why Costa’s musical journey is clearly the one he’s meant to make.

1) He gets to represent his country and leverage Latin musical influence.

“The choice I made to take this path was really worth it,” he says. “Growing my career slowly, calmly, without any exaggerated haste, just letting things happen, I realized that I could be a representative of a music genre from a whole continent, the South American continent. So I’m a Brazilian who tries to get closer and closer to Latin American music from the neighboring countries we have here. Over time, I have seen that it really makes a difference. I carry some of my continent through my musical creation. This artistic responsibility is a very important thing. This is part of a career that intends to be a calm and solid story. When I see that the rewards come in a natural, gradual way, this makes me very happy.”

2) Presenting the music of South America provides listeners with a glimpse into the continent’s cultural melting pot.

“I think Brazilian music, like Cuban music, North American music, gypsy music, like various cultures of the world, [has] in some way the will to represent the people, to represent a certain lifestyle. This influence comes in several ways, in the environment, in the climate, in the cuisine and from human culture. The music of Brazil, the music of Latin America, it represents the people that are very mixed, that are very diversified. I think that’s why there is so much interest in our music. When I say this, I mean this whole side of the world – the Americas – that [has] caused the world to blend more and more. I think that is why this interest is so profound, because the mixture of cultures happened here.”

3) He can carry on his father’s musical legacy.

“The memories I have of the guitar are from when I was very young. My father played the guitar very well. So it’s a natural thing for me to have followed this path and to become interested in this instrument. From an early age, my house was a gathering place for musicians. We have always had a culture of hosting serenades, musical encounters and such. This is something that I carry [on] today within my way of life. It turns out to be something that is always recurrent in my story.”

5) He introduces his seven-string guitar to fans as if he were introducing a best friend … or a new language.

“One very interesting comment I received some time ago was when a guy came to me after the show and said, ‘look, I really enjoyed getting to know this instrument that you play.’ Somehow, he was making a parenthesis as if I did not play the guitar, as if the guitar was not so important to the music I do, but focused on the content, the final result of the music. I found it interesting to have such a comment, a guy who really liked the way I make music taking much more into account the musical discourse that was presented than the instrument that I play. The way he said, ‘I really enjoyed getting to know the instrument that you play,’ would be my expression through the guitar arriving in the universe of music.”

6) He has the opportunity to make special connections with diverse audiences all over the world.

“This connection with the audience is a very interesting thing. I travel the world and notice, of course, the differences with the audience, the preparation of the audience. This is a very subjective thing. How do you feel you have a good connection to the audience? That depends a lot on the day. Usually there are audiences who are more welcoming, more warm. I think [a connection is made] when you have good energy and when everything is helping – the sound, the acoustics of the room and also the sound engineer.”

7) Every time he performs he feels he’s delivering his best truth.

“What I like the most about performing live is that it’s the moment of truth. It’s a time that puts you in a very delicate situation, a moment that you have to prove yourself and your abilities. At the same time, you have to somehow conquer the audience. You have to have good taste, not exaggerate your performance. The truth of the artist is the moment he presents himself. I have a relationship of total dedication to the stage and I always hope for this to happen in the best way. In Brazil, we say that ‘practice is practice and the game is the game.’ At the moment of performance, everything must be prepared – all the energy that I built up to be able to play for the people. This is the most important moment, a moment of redemption. It is also a moment of balance that is difficult to achieve … a lot of concentration and a lot of relaxation at the same time so that the music can reach and touch the hearts of all people.”

Yamandu Costa makes his Vail debut, kicking off the 2019 Vail Jazz Club Series at The Sonnenalp’s Ludwig’s Terrace on Wednesday, July 10. Doors for the first seating open at 5 p.m. with performance beginning at 5:30. Get first set tickets here. Doors for the second seating are at 7:30 p.m. with music starting at 8 p.m. Get second set tickets here. Tickets at $40. Full dinner service is available, not included in ticket cost and a $30 per person food or beverage minimum applies.

The Brazilian guitarist’s performance gets fast and furious for the big stage in the all-weather Jazz Tent at Lionshead’s Vail Square at 6 p.m. on Thursday, July 11. Tickets are $25 for general admission, $40 for preferred seat and $50 for premium seat. Beer, wine and cocktails are available for purchase. Get tickets here.

Howard Stone: The DNA of Jazz Scroll to top