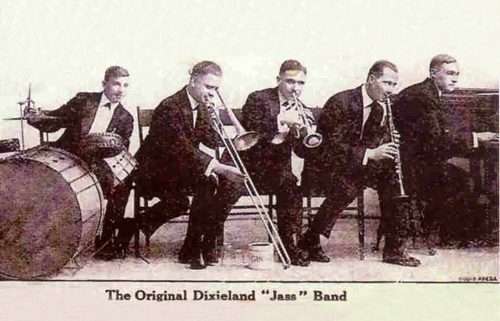 The world of jazz is in a very festive mood as it celebrates a seminal year in the history of jazz: 1917. Four of the greatest masters of the art form were born that year – Ella Fitzgerald, Dizzy Gillespie, Thelonious Monk and Buddy Rich.  It was also the year that the Original Dixieland Jass Band (ODJB) recorded what is generally considered to be the first jazz recording. “Livery Stable Blues” was the hit side of the record (you remember records, you actually turned them over to hear the music that was on the other side) and on the “flip” side was “Dixieland Jass Band One-Step.” The record became an instantaneous hit and sold over one million copies, setting off a craze for jazz that ushered in the Jazz Age (the 1920s).

Recording of music on cylinders was well established in the 1880s, so why was jazz not recorded before then? Because there wasn’t any jazz to record.  While musicologists like to debate when jazz was first performed and by whom, it should be understood that even the use of the term “jazz” to describe the music was not generally agreed upon until the early 1920s, when jazz became the preferred spelling.

Whatever the origins of its name, it is clear that for at least a decade prior to the recording, jazz was evolving, but it can’t be pinpointed with accuracy when the music was first performed. This is for a number of reasons, the most important of which is that jazz is an art form that has evolved (and continues to evolve) from a combination of musical traditions and there is no one point at which all the ingredients were first fused together in a “jazzy way.”  Some of the most important ingredients include: the music of the brass and marching bands from the post-civil war era; ragtime and boogie woogie music from the late 19th century; and the blues. So when were these and other musical traditions joined together to produce jazz? No one can be sure.

Today anyone can make a recording, and of course, music is easily notated and preserved in writing. In the early 20th Century, the recording industry was concentrated in NYC and jazz was centered in New Orleans and the South, although it had begun to spread to several other urban areas. The musicians were not conservatory trained and most couldn’t read music. The widespread availability of the radio was still more than five years away and the first talkie movie was over a decade away, so the best technology of the day was a two-sided disc that when turned at 78 rotations per minute (rpm), could spread jazz throughout the globe.

But it took the ODJB, composed of five white men traveling from New Orleans to NYC, to light the fuse that set off the jazz explosion. It should be remembered that jazz was performed for dancing and therefore jazz bands were dance bands. While the ODJB claimed to be the “creators of jazz,” it is clear that jazz was generally created by blacks and creoles in New Orleans. For many jazz historians it is a sad fact that blacks weren’t the first to record a jazz record and that the band that did had copied the music of successful black musicians in New Orleans. There was of course no one creator of the music.  The fact is that early jazz greats such as Buddy Bolden and King Oliver stayed in New Orleans and were just some of the “chefs de cuisine” that prepared the musical gumbo that became jazz, along with many others, known and unknown, that added to the jazz recipe.

The quality of the playing on the record, with its limited improvisation and its repetitive choruses, was not the best example of jazz at the time and there was a corny aspect to the music with instruments imitating the sounds of barnyard animals, but the record displayed a lively danceable beat and the importance of the record cannot be denied. In essence, the technology of sound recording gave a large number of Americans, who had never heard jazz, their first chance to hear the music and allowed for the rapid dissemination of a regional sound, which was then embraced in the four corners of the U.S. and then globally.

The famous bandleader Paul Whiteman explained it best: “One moment jazz was unknown, a low noise in a low dive. The next, it became a serious pastime of a hundred million people, the diversion of princes and millionaires.”

The ODJB was the first band to use “Dixieland” as part of its name. While there is no doubt “Dixieland” was regularly used to describe the Southern states that seceded from the Union, the origin of Dixie as the descriptor of the South is clouded in mystery. The most accepted explanation is that “Dixie” is the corruption of the French word for 10, “dix,” and when banks in the French Quarter of New Orleans (and ultimately in the surrounding areas) first issued their own $10 bank notes with Dix on the reverse side, English-speaking southerners starting calling the bills “Dixies.” Eventually all of the South became known as Dixieland. The fact that the ODJB adopted this name also created another first, the music of New Orleans became known as Dixieland Jass and finally Dixieland Jazz.

Vail Jazz will celebrate the rich history of the music of New Orleans on July 12 at 6:30 pm and 9 p.m. when it presents the legendary Henry Butler, New Orleans blues vocalist and pianist at the Sonnenalp Hotel. In addition, Vail Jazz will present Butler, Bernstein and the Hot 9 in concert on July 13 at 6 p.m. in the Jazz Tent at Vail Square in Lionshead. You won’t want to miss that authentic ‘Nawlins vibe.

The sounds of New Orleans soar through Vail this week